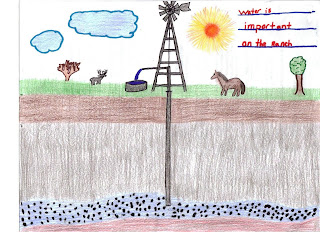 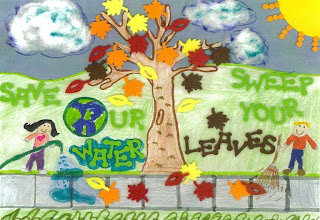 Each water conservation district within the education cooperative sponsors an art contest for fourth and fifth grade students. The program communicates the message of water conservation to the schools by giving a detailed and interactive presentation. Winning artwork is featured in a calendar published by each district and offered free to the public. 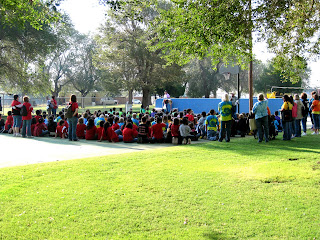 This past Thursday, I participated in the 2009 Ag & Oil Day in Seminole, Texas. Representing the Llano Estacado UWCD, I gave a presentation to 250 5th graders on the topic of rainwater harvesting. The students were from the schools of Seminole, Loop & Seagraves. Following the presentation, students painted Three barrels that will later be donated to their schools. 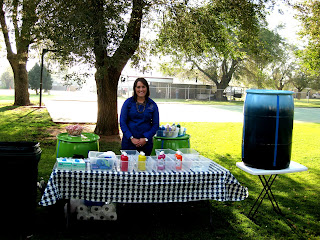 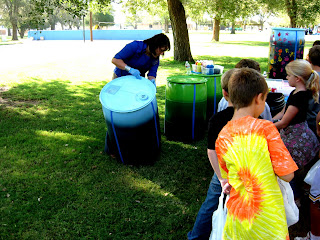 Each student painted the barrel by using a sponge. 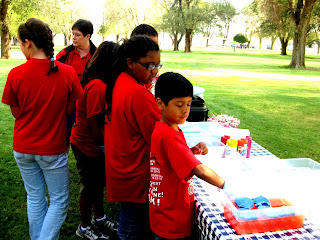 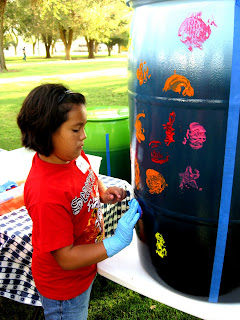 The finished product. The kids were very proud of what they had done and I cannot wait to give them their rain barrel. 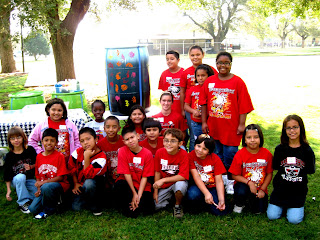 Posted by Education Coordinator at 9:12 AM 0 comments

On Monday, September 14th, a Major Rivers workshop was hosted by the Education Cooperative. The event was held at the ESC Service Center in Lubbock, Texas. Teahers from different school districts within Region 17,came together to learn about the Major Rivers curriculum and how they could implement the program in their classrooms.

Facilitating the day’s events, from the Texas Water Development Board, was Linda Ruiz McCall and her assistant, Whitney Milberger-Laird. McCall & Laird walked the teachers through the Major Rivers curriculum and showed them how to engage their students in the programs activities. 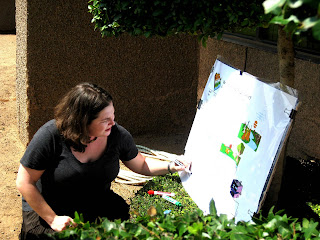 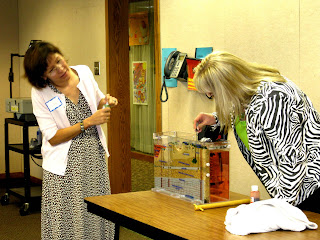 Linda McCall showing teacher how to use Groundwater/Surface Model
Two guest speakers were also present to give the educators a presentation on groundwater districts & irrigation practices in West Texas. Speakers included, Jason Coleman, Manager of the South Plains UWCD & Dr. Dana Porter of Texas AgrilLife Extension. I also gave a brief presentation on the Education Cooperative. 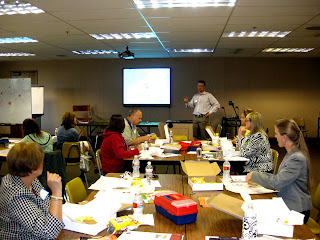 The day’s events concluded with each teacher receiving a Major Rivers kit, donated by the Brazos River Authority, and a small token of appreciation from the Education Cooperative. 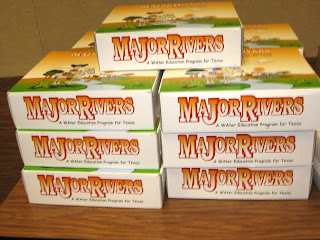 For more information on the Major Rivers Program you can visit the TWDB website at http://www.twdb.state.tx.us/edu/MajorRivers/index.asp
or contact myself for information on how to receive a Major Rivers packet.
Posted by Education Coordinator at 10:48 AM 0 comments

I received the following information via email this morning. I thought it was worth posting on the blog.

I encourage you to take the time to read the text before clicking on the link to view the data.

Why was residential water use not shown separately in previous years?

The history of the Water Use Survey was to develop estimates, for purposes of future water supply planning, of the total amount of water needed to support a city’s residents and its economy. Such an estimate was never intended to be used as a method of comparison between cities for the purpose of implying relative conservation efforts, because the estimate is particularly ill-suited for that purpose. However, with the growth of interest in conservation, it was clear that an estimate more suitable for comparison purposes should be developed. A series of changes was made in the Water Use Survey to begin requesting separate data on residential water use. For the 2007 estimates, it was determined that the residential water use estimates were of sufficient reliability for enough cities to begin publication. While there will remain valid reasons for differences between cities even in residential water use per capita, we hope that these new estimates will provide a more useful method with which to examine differences in habits regarding water use.

Why is residential water use not shown for some cities?

While the separate reporting of residential water use has been encouraged, it has not been required to consider a survey administratively complete. Many water systems are likely to lack the capability of tracking residential use separately, while others simply failed to report or reported an amount which was inconsistent with their reported total water use and generated an estimate of residential GPCD which was considered too unreliable to publish. TWDB staff will be working with those major cities for which residential use was not published in an effort to correct these problems.

Posted by Education Coordinator at 9:19 AM 0 comments