AMARILLO, Texas – The ninth annual Texas Commodity Symposium will focus on an issue that seems to be on everyone’s mind – water.
Nearly 40 percent of the crops grown on the Texas High Plains are irrigated, making irrigation a vital portion of the region’s economy. Thanks to better crop varieties and water conservation practices, farmers are now able to produce more using less water. The impact of the region’s total crop production to the regional and state economies is estimated at $2.1 billion and $2.2 billion respectively.

How important is irrigation to the economic activity of the High Plains?
According to Darren Hudson, professor and Larry Combest Chair for Agricultural Competitiveness, irrigation directly contributes $1.6 billion to the economy of the High Plains, and indirectly contributes $2.5 billion to the area. Approximately 16,000 jobs can be attributed to irrigation, which is worth $630 million in regional income.
There are also several unmeasured positive impacts of irrigation, such as property values and tax bases in rural areas, which are all tied to the regional economic activity and activity in population centers like Amarillo, Hudson said.

Hudson will address the positive impacts of irrigation on the economy of the High Plains at this year’s symposium. He will be joined by a panel of Amarillo and Texas Panhandle businessmen and community/regional representatives who will discuss ways to address the challenges facing water conservation, agriculture, rural communities, and urban populations to promote and protect the long-term viability of this key economic base for the region.

The Texas Commodity Symposium will be held in conjunction with the Amarillo Farm and Ranch Show in the Grand Plaza Room at the Amarillo Civic Center. Registration will begin at 8:30 a.m. and the Symposium will begin at 9 a.m. The event is free to all and will conclude with a catered lunch at noon. There will also be a Washington Perspective on issues such as indirect land use, cap and trade and healthcare, and updates from the Natural Resources Conservation Service and the Farm Service Agency. 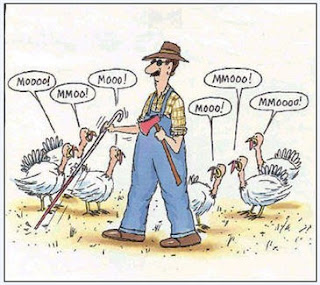 The holiday season is fast approaching….as well as that extra pant size. With more family time and bigger notches on your belt, comes gallons of wasted water. A typical American Thanksgiving dinner for six people requires over 30,000 gallons of water. To help you stay green and on Santa’s water saving “good list”, listed below are 6 ways to save water during Thanksgiving. 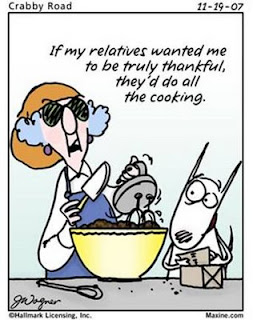 Holiday guests dirty up many dishes, but when it's time to clean up, make sure that you're running your dishwasher in the most efficient way possible. Scrap plates instead of rinsing them with hot water, and making sure the dishwasher is full each time it runs. To save on the costs of heating water, avoid special cycles like pre-rinse and rinse-hold, which can be unnecessary, and stop the dishwasher before it's time to dry—the dishes can air dry, instead. 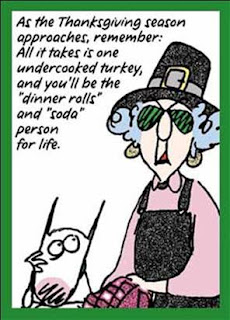 The best way to thaw a frozen turkey is in the refrigerator. It takes about 24 hours for every 5 pounds. If you are like many Americans, you need to 'speed-thaw' the bird. Keep the turkey in the original tightly sealed bag and place it in a clean and sanitized sink or foodservice safe pan. Submerge in cold water and change the cold water every 30 minutes. The turkey will take about 30 minutes per pound to thaw. Our imaginary turkey is 10 pounds so it would take 300 minutes with 10 changes of water. If you used only 10 gallons of water each time, it would add up to 100 gallons per turkey. If 1/2 of the turkeys in the US were speed-thawed, that's over 2 BILLION gallons of water. Any way you look at it, we use enough water to create a sizable Turkey Lake just to get Mr. Gobbler ready to cook. 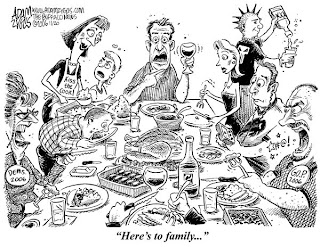 Your having the family over at your house this year for Thanksgiving? Impressing the aunts and uncles with a nice green lawn are always high on your list but unnecessary and wasteful. Cut down watering on cool and overcast days and don't water in the rain. Adjust or deactivate automatic sprinklers. You can save up to 300 gallons per time but opting to impress the extended family with your homemade bread.

4: Leave the China in the closet 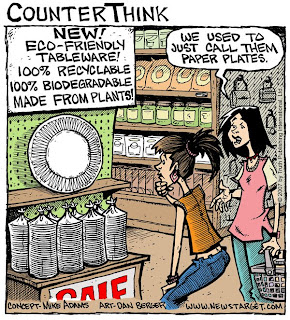 Use Recycled-Paper Products instead of setting out your grandmother’s fine china. Products made from 100 percent recycled paper require much less water in their manufacturing than do those made from virgin paper. Who really wants to clean dishes anyways?

5: Cleaning up the Leftovers 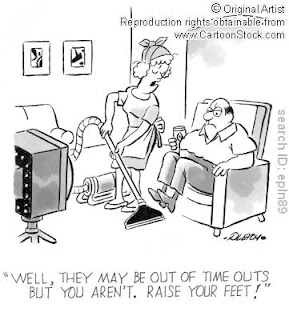 Approximately 30 million of us will watch football after the meal. The next spike occurs at halftime of the football game. Just like clockwork, American toilets will flush 30 million times and use 108 million gallons of water - enough water to fill an entire football stadium! Water efficient toilets would save 62 million gallons of that water. With the meal, time zones in the US go from east to west and stagger the energy and water use. The football game happens in real-time and much of the country hits the bathroom at the same time.

The point of all this is not to have you eating bologna sandwiches for Thanksgiving, but as you let your belt out after dinner, you may want to give thanks for living in a time and place that allows such enormous energy and water use. 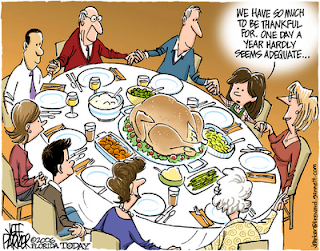 Giving Credit Where Credit Is Due: wattbusters.com , usnews.com
Posted by Education Coordinator at 9:30 AM 0 comments

I have a good explanation for not blogging last week. The LEUWCD is sponsoring a rainwater harvesting project at the Gaines County Show Barn. We started installing the system last week. So I was busy shoveling and gluing and tucking my nice slacks in my boots. 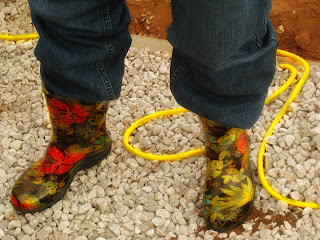 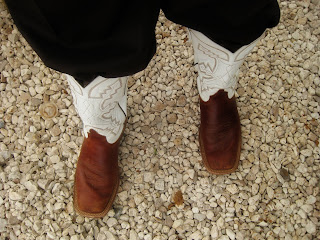 As much as I would love to give you all the details on the rainwater project, I can’t. We will be completing everything one week from today. Check back then for an entire blog on the project.

Last night I was waiting to watch Desperate Housewives on ABC, and had to sit through ten minutes of Extreme Makeover Home Edition. Luckily enough I turned the TV on in time to see that Ty, the host of the show, and his team had installed a rainwater harvesting system in the chosen family’s yard. My heart started beating a little faster just thinking of all the people watching the show who would see that segment. 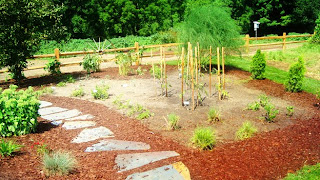 Rainwater harvesting is something that all of the districts involved in our cooperative, try to educate their communities on. The amount of money and water that you can save by having a system at your home is astonishing! So to have a popular TV show supporting water conservation through rainwater harvesting…..made my water saving heart happy.

I was not able find the link to the clip but I did find pictures from the show on ABC’s web site. To view the pictures, click on the following link http://tiny.cc/U42lc
Posted by Education Coordinator at 8:06 AM 0 comments

LINK IT TO ME 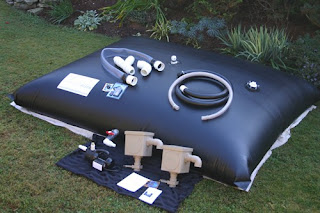 Developed by Jim Harrington in response to the drought in Georgia. He recognized the havoc that a lack of available water could wreak on his customers gardens. The result is The Original Rainwater Pillow, an innovative way to take advantage of Georgia's short, heavy downpours and provide ample water for flowers, gardens and other outdoor watering needs. Better yet, we do it without hard-to-disguise tanks and the garden excavation required for cisterns!
The standard 8' x 10' model fits in most crawlspaces and under deck areas, and can hold 1,000 gallons of water at a time. Custom sizes that can hold up to 40,000 gallons of water may also be designed to fit your available space. Prices range from $2,500-$4,200 depending on the size of the pillow you want.
View This Unique Product Yourself: http://www.rainwaterpillow.com/main.aspx
-------------------------------------------------------------------------------------------------
Next up is a contest sponsored by Smithmag.org, called Six Words On Water
The Six-Word Challenge is about one of summer’s treats and earth’s increasingly rare resources: water. “Whether your half-dozen well-chosen words are about water worries (”Save water, shower with a friend”) or the joys of jumping into the deep blue sea (”Oldster surfing: Call it ‘Gray Crush’”), we want your six words on water,” the article stated.
Three winners received a Spreadshirt tee that shows off their six wet words.
Here is one of the winning t-shirts: 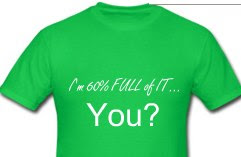 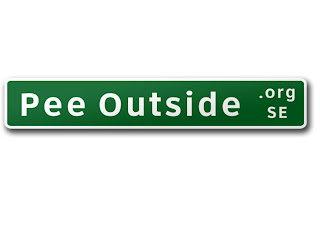 Peeoutside.org was founded in 2007 as a worldwide effort to get people to save water. The goal is to promote a simple way to ease water consumption. Quite simply, millions of gallons of water could be conserved each day – by having volunteers pee outside.