By Caitlan Osborn
The months from October 2010 through July 2011 have been the driest 10-month period in Texas since the state began keeping rainfall records in 1895.


However, the current drought is not the worst Texas has experienced. A drought that began in 1950 lasted seven years before the state got a reprieve. However, Ron Sosebee, a professor emeritus with the Department of Natural Resources Management, said he considers the current drought to be the hardest.

“In my personal opinion, this drought is, in many ways, actually worse than the drought in the 1950s,” he said. “I know that the drought of the 1950s is still considered to be the worst drought we’ve experienced in the southwest for centuries, but without question this has been the driest year that we’ve ever recorded.”

Jeff Johnson, assistant professor in the College of Agriculture Sciences and Natural Resources, said while he does not expect the drought to last that long, he does not see it ending any time soon.

“El Niño-La Niña drives the drought right now,” Johnson said. “When it gets low, we’re in a dry period. So it’s been very low and they’re expecting it to come back up, but not very high. By about late fall, it’s probably going to turn down again. It’ll end up becoming another dry winter and another dry summer, which would be bad.”

The Texas AgriLife Extension Service stated that so far there has been an estimated $1.8 billion lost from state cotton production alone and a total of $5.2 billion in lost income.

Johnson said most of the loss is coming from areas around Lubbock, where most of Texas’s cotton is produced.

“About two-thirds of that $1.8 billon for the state economy is right here,” he said. “So this area is losing about $1.2 billion from just cotton. It’s a huge deal.”

There has also been an estimated 52 percent of cotton acreage abandonment, Johnson said. While most of the abandonments are from dryland farms, he said the intense heat has also caused irrigated farms to lose one-third of their yields.

Another burden the state faces from the lack of rain, Sosebee said, is the number of fires that have spread across the state. To date, there have been more than 3.3 million acres in Texas ravaged by wildfires.

“The impact on the rangeland is exacerbated by the fires,” he said. “Our problem is going to be recovering these rangelands from this devastating condition that they’re in right now.”

Sosebee said a way farmers can help recover their dying lands is by preventing livestock from grazing.

“The more damage we do to the grasses that are left, even though they are dry, there is a higher chance that they will not return,” he said. “We’ll probably have a changed situation once this drought is relieved.”

He also said he believes that catching rainfall will help farmers manage their resources better when dry spells like this occur.

“Most of the rainfall that occurs, when it does occur, will eventually run off, rather than soak into the ground,” Sosebee said. “Only about 10 percent of our rain actually gets used.”

Ken Rainwater, director of Texas Tech’s Water Resources Center, said the department works to plan for drought conditions in terms of water rationing. He said the university’s water supply comes from a series of underground wells that are separate from Lubbock’s own water supply.

“The situation we have on Texas Tech’s campus is kind of the opposite of what is happening under the irrigated croplands,” he said. “Since we stopped pumping here in the city, the water levels have come up quite a bit and the depth of the water under the campus is only about 30 feet. So it’s a lot easier to produce the water from those levels.”

The Water Resources Center, Rainwater said, focuses on three goals to keep campus foliage healthy, while maintaining a balance on the amount of water the school uses: augmentation, conservation and protection.

“The key to augmentation is finding new water,” he said. “Conservation, of course, means using the water we do have carefully and not wasting it, whether domestically or for agricultural or industrial purposes.

“Protection is trying to keep the sources of our water from human contamination and, in places where we have had (contamination), we try to treat that water so it can be useful again and reduce its chance of causing negative health effects to humans or the environment.”

People need to prepare for the possibility that the drought may continue for another year, Sosebee said, or maybe longer, and conserve what little resources they have left.

“If it lingers on for another year or two, then it’s going to become real serious in terms of economics,” he said. “For the city of Lubbock and other areas, there really isn’t going to be much in terms of production. I think it will hurt the whole city, and even the whole region, quite seriously.”

Despite the possible future the state faces, Johnson said much of the drought is out of human control.

“This is a bad drought,” he said, “but we’ve been through bad droughts before. I think we just have to wait it out.”

Posted by Education Coordinator at 7:28 AM 0 comments

Because of the severe drought, in our part of the world, our cities have restricted their residents to watering their lawns twice and week, after 7 p.m. While some of you may have been accustomed to doing this for some time now, I think the new water restrictions have been an eye opener for many in West Texas. To help us all save water and money, below is a list of ways you can save water on your lawn. 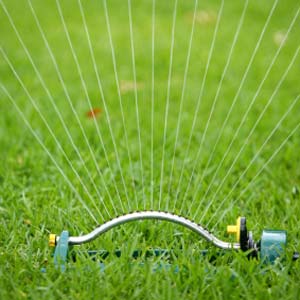 Are some grasses more drought tolerant?
Kentucky Bluegrass can survive extended periods of drought by slowing growth, turning straw colored and entering summer dormacy. Once water becomes available again, it can initate new growth form the crown of each plant.

Warm Season Grasses such as bermudagrass, zoysiagrass, and St. Augustinegrass actually prefer warm conditions and can tolerate most drought conditions due to their deep and extensive root systems.

How much water does my lawn need?
The amount water depends on the type of grass you have. In general, applying 3/4" to 1 inch per week is the sufficient during the hot summer months. Rainfall and cooler temperatures means your lawn requires less water.

Too much or too little water?
Over watered lawns lead to excessive growth, summer fungal diseases and more frequent mowing.

Too much water can be deadly. When grass is over watered, the roots are unable to breathe, and eventually rot. Often times an over watered lawn looks like it needs water, it will turn yellow and wilt.

Too little water during summer months your grass will go dormant. Grass color will lighten and most lawns will recover when water returns. You can tell when your lawn is thirsty by doing a foot test.

Walk across the grass and if it doesn't "spring" back up and your footprints are visible, this is the first sign it needs water.

Water your lawn slowly to allow it to soak into the soil and prevent wasteful run off.

Water in the early morning when evaporation is lowest (5am to 10am).

Mow your grass at the right height. Longer grass increases the depth of the root system, shade the soil, and help with drought tolerance.

Annual core aeration can loosen compacted soil and allow water to soak deeper into the ground.

Posted by Education Coordinator at 7:25 AM 0 comments