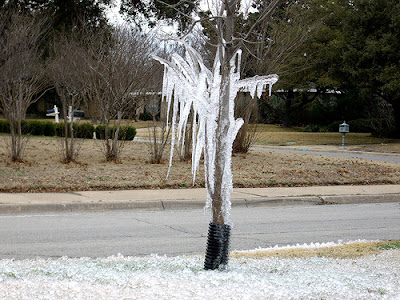 The sensors are designed to shut off automatic sprinkler systems during rain or when temperatures drop below freezing, she said. They can be purchased at most places where irrigation equipment is sold. They range in price from about $60 to $90.

Irrigation systems can be turned off simply by the turn of a dial, but problems have occurred most often around commercial properties on weekends or overnight when no one was available to turn off the sprinklers as temperatures dropped below freezing, Woodson said. Major roads and side streets have been covered with ice as a result.

“If no one is available to turn off the system, a rain and freeze sensor will prevent a hazardous situation or wasting water,” she said.

New irrigation rules in many communities in the Dallas-Fort Worth area require all new systems be fitted with the sensors, Woodson said. Some cities are also requiring that they be installed on older systems.

“Businesses should have this responsibility written in the contract with their property management or landscape company,” Woodson said.
Posted by Education Coordinator at 8:14 AM 0 comments

What If Your Jeans Could Save Up To 16 Million Liters of Water
Levi, announcnes the launch of their new jean line called Water
To learn  more abou the Water
http://store.levi.com/waterless/
Posted by Education Coordinator at 8:59 AM 0 comments