It’s that time again. I will be visiting seven schools, this month, in the Permian Basin UWCD & Llano Estacado UWCD for their third annual art contest. If you need a reminder of what our art contest is all about, visit our Education Cooperative website at
http://www.savingh2o.org/ and click on ART CONTEST.

My favorite part about the contest is getting to look at all of the creative pictures that the students draw. We have a group of judges who look at the pictures for the contest, but I always enjoy looking at the drawings beforehand. It’s not the artistic pictures that catch my eye, but the humorous ones. So without further ado, I would like to present to you the funniest pictures from the SLUWCD & SPUWCD Art Contest. I hope you enjoy them as much as I do! 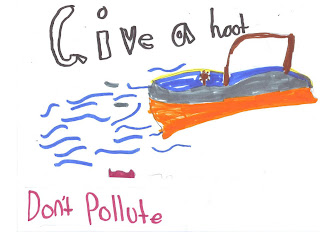 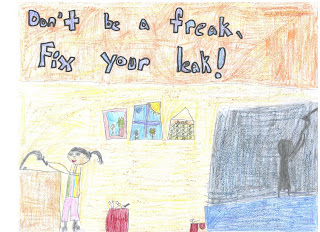 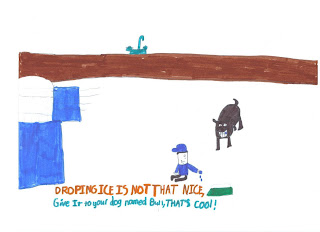 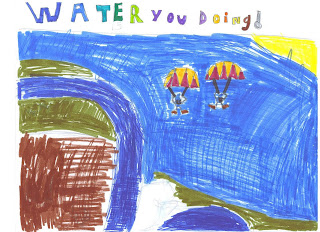 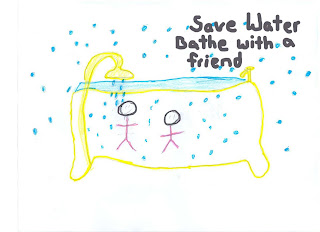 Posted by Education Coordinator at 9:15 AM 0 comments 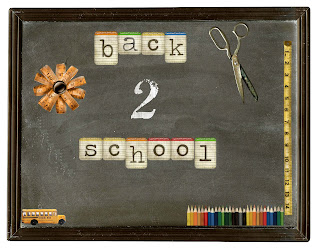 Today is the first day of school for many of the students in our UWCD! I enjoyed watching the cars go by my house this morning and seeing all of the little faces in the passenger seats with their backpacks already on. Whether it is your first day at a new school or the first day of your senior year, I hope it is a positive day for everyone. For all of you teachers out there, only nine more months to go! (ha ha)

With today being the first day of the school, I encourage you all to be water wise throughout the year. To help you do so, I have put together 10 ways that you and your classmates can save water at your school. Students have the reputation of being wasteful, but with these tips students can help save water and money for their alma mater.

1. Save water from the drinking taps. Place ice cream containers under the
water fountains/bubblers and pour excess water on the garden.

2. Turn taps off after washing hands.

3. Remove weeds as soon as they spring up - they not only shelter pests and
diseases but are notorious water thieves too.

4. Keep your eyes open for signs of underground leaks, like a patch of grass
that is growing better than the rest, or a wet spot on your concrete. .

5. Catch rain water. Place containers outside when it rains or install
rainwater tanks. Use the rainwater to flush your toilets or watering the
garden.

6. Wash paint brushes in a bucket or ice cream container instead of under a
running tap.

7. Bring a water bottle to school and keep refilling it rather than using the
bubbler taps. At the end of the day, any left-over water can be poured on
the garden.

9. Start a 'Water Saving' club. Members of the team can monitor leaking taps,
design posters on water saving tips, and tell friends about their
achievements.

10. Telling your friends how to save water too.
Posted by Education Coordinator at 8:16 AM 0 comments

There is often a lot on “how to” save water, but unless we all understand the importance of doing so we might not act.

I found the following article by means of Twitter this morning. “In response to declining levels in the two reservoirs that supply drinking water to 1.1 million people in Austin and Central Texas, the Lower Colorado River Authority is calling on its wholesale water customers to implement mandatory water use restrictions under their drought contingency plans”, noted cOnservitude via Twitter.

Austin residents and businesses will be limited to watering their lawns with sprinklers once a week and will face fines that start at $400 for violations, according to new city drought measures that will start Aug. 24.
First-time violators will be issued fines, not warnings, as is currently the practice.
Among other measures announced Friday, restaurants will not be allowed to serve water unless a customer requests it, charity car washes are banned, and outdoor fountains are prohibited except to provide aeration for aquatic life.
The restriction that will have the widest reach is the additional limits on outdoor watering. Under the rules, known as Stage II restrictions:

• Homes with odd-numbered addresses water on Saturdays.
• Even-numbered homes water on Sundays.
• Odd-numbered businesses and multifamily buildings water on Tuesdays.
• Even-numbered businesses and multifamily buildings water on Fridays.
• Automatic sprinkler systems can run only between midnight and 10 a.m. on the designated day.
• Hose-end sprinklers and soaker hoses can run only before 10 a.m. or after 7 p.m.
• Watering by hand is allowed any time on any day.
• Golf courses may water fairways only once a week and tees and greens every other day.

For the full article, read here http://tiny.cc/GXMss
Posted by Education Coordinator at 7:24 AM 0 comments

I have been working on an article for the South Plains UWCD Newsletter that is an overview of all the activities that the Education Cooperative has done throughout the summer. I am amazed at how we were able to squeeze all of those events into just a few months. When I took this job, over a year ago, I would have never of thought I would be lugging giant suitcases around the state capitol, sleeping in tin buildings or flying in shoe boxes across the county. However, with all of those experiences behind me I feel that I and the program have grown so much in one year. I look forward to continuing to help the program move in a positive direction and I am excited for what is yet to come…

The following is the article I wrote for the newsletter…..

What a busy summer it has been for me, working with four underground water conservation districts. It seems like I have been around the world and back learning different techniques and meeting new people associated with the water conservation industry. I feel that we have had a successful year promoting our program and showing not only state-wide, but nationally, what our cooperatives goals are and what we are looking to do in the future. I am excited to see where our program will be by this time next year.

Water Conservation Day at the Capitol 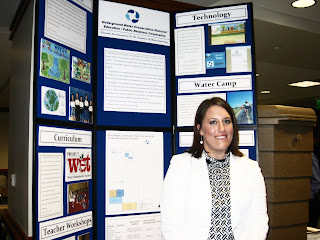 On Thursday, May 21st, the Texas Water Foundation hosted Water Conservation Day at the Capitol. The event was held at the Texas State Capitol so that members of the state legislature could be exposed to the water conservation programs in our state. As policy makers considered important water conservation legislation, knowledge of existing programs is helpful.
Our program was one of the ten groups that participated during this event. A summary of our existing programs was created by using pictures of selected activities and a brief explanation of each. The display highlighted the individual water districts within the cooperative and also illustrated the importance of the cooperative program. I also enjoyed getting to know Carole Baker of the Subsidence District. We appreciate all her hard work on putting this event together. 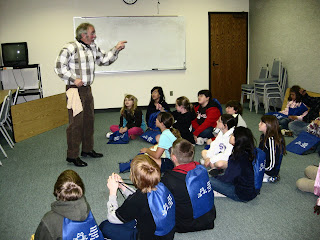 I volunteered at the 21st annual Children’s Groundwater Festival in Grand Island, Nebraska. The festival is sponsored by the Central Platte Natural Resources District and was held at the Central Community College in Grand Island.
The purpose of my trip, was to get an inside look at what it takes to host a groundwater festival. I was also eager to learn new programs and presentations that we might implement in our program.
This year’s festival hosted over one thousand fourth and fifth grade students from the state of Nebraska. Three-hundred volunteers and local and state wide sponsors helped make the festival successful. Students were taught the physical properties of water by making and launching their own water rockets. Other topics addressed were rain sticks, mapping & conservation. 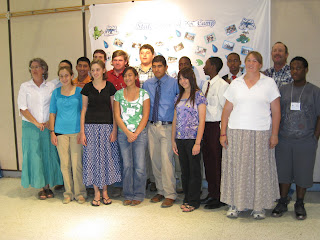 The 17th annual State Youth Water Camp was held at the George and Opal Bentley Center in Monahans, Texas. This year's camp took place July 12th through the 16th.
The camp’s objective was to help make Texas high school youth aware of current water issues and to develop an appreciation of how agriculture, industry, municipalities and home water use impact water quality and quantity. Fourteen students from around the state were excited to spend the week learning about the importance of water conservation.
I enjoyed getting to know the students and staff during our many field trips and classroom activities. We look forward to the 2010 camp and anticipate sponsoring students from the SPUWCD.

Blog & Twitter
The Education Cooperative blog was created in 2009 so the communities in our groundwater districts could be aware of various activities and programs we offer. It is also a way to promote our happenings not only state-wide by nationally as well. I maintain the blog with regular entries of commentary, descriptions of events, or other material such as graphics or video. To view the Education blog go to http://www.savingh20.blogspot.com/
The Education Program is also an active member on twitter. Twitter is increasingly used for commercial organizations to tell customers "what's new." In addition, politicians and celebrities use it to keep constituents and fans informed. You can follow our tweets via our website at www.savingh2o.org or by becoming a follower on twitter through our username - savingh2o.
Posted by Education Coordinator at 8:09 AM 0 comments