Posted by Education Coordinator at 8:32 AM 0 comments 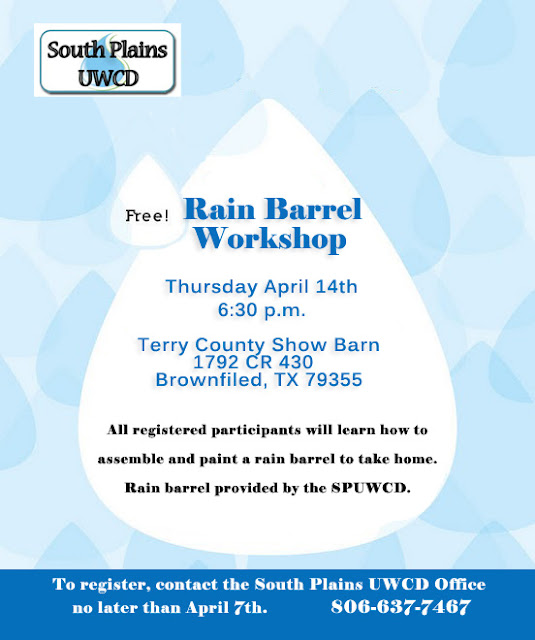 You must call the office to register. Rain barrels will only be given to those who call on or before April 7th.
Posted by Education Coordinator at 10:43 AM 0 comments

The South Plains UWCD is hosting a Rainwater Harvesting Workshop in Brownfield on April 14th  at 6:30 p.m. The District will be teaching attendees how to build a rainwater catchment system out of a 44 gallon trash can. Participants will receive a free trashcan /rain barrel and will have the opportunity to paint their barrel at the workshop.

(please excuse our scratched off paint. We are working on the best paint solution and found it after I took these pictures)

In preparing for the upcoming workshop, we have been building our own trashcan rainwater barrel today in the office. We drilled holes in the top of the barrel and placed a screen underneath the holes. 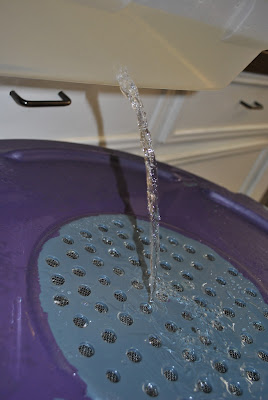 We painted the rain barrel/ trash can purple and turquoise. 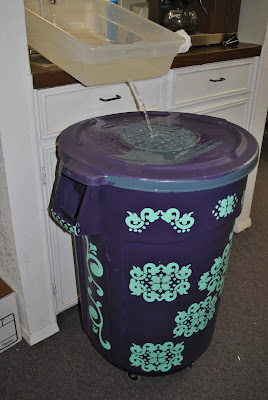 then  added a spigot to hook up a garden hose too 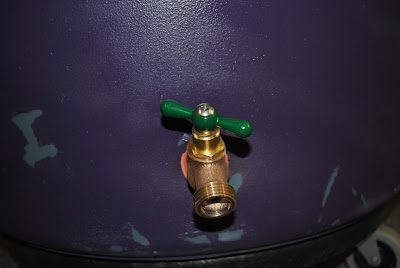 And that's it. I will post more detailed instructions once the workshop is over. 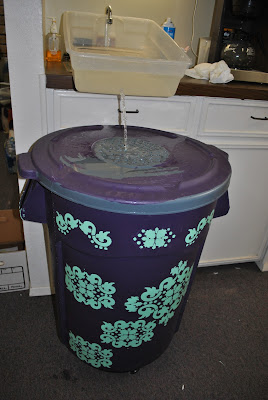 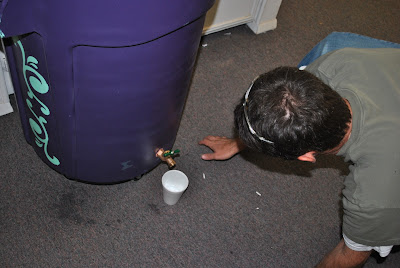 If you are interested in attending the workshop please send me an email at savewater and we will put you on the sign up sheet. The last day to register is March 31st.
Posted by Education Coordinator at 12:55 PM 0 comments

Greywater: From washing machine to garden

I never thought about using Greywater until i started working here. For people that haven’t heard of grey water, it is a concept of re-using water.  A simple example would be to collect shower water and then using it to water plants.Based on statistics about 70% of all water used in the home would be classified as grey water.


Greywater: From washing machine to garden
By JORDAN LAIO
Among the southern and southwestern states, California was not alone in experiencing drought conditions from 2007 to 2009. And yet the average family uses about 500 gallons of water per day, according to the Los Angeles County Waterworks District. A significant portion of this often goes to watering lawns and ornamental plants.

Of course, planting native and drought resistant plants in place of grass is a huge step towards water conservation. But suppose you want to have your cake and eat it too (i.e., conserve water and grow water-loving plants)? Welcome to the world of greywater reuse.

WHERE DOES GREYWATER COME FROM?
Greywater is water which you have already used for something in your home, but is not technically toxic. This might include water from your sinks, showers, dishwasher and washing machine (but not toilet).

By diverting this "dirty" but non-toxic water to your yard, you're conserving valuable drinking water, preventing what is technically useful water from going through an inefficient wastewater processing system, and you're diverting a wasted resource to grow plants, and perhaps to grow food.

And it even helps the pocketbook. "Recycling water as greywater is good for the environment, and saves me money," said L.A. River advocate and L.A. Creek Freak blogger Joe Linton. He built a DIY laundry-to-landscape system, which directs water from the washing machine in his second story apartment to his garden.

According to Linton, such a system is simpler for beginners because the washing machine's pump helps divert water to the garden. Also, with a washing machine there is less worry about clogged pipes compared to, say, a kitchen sink, where you're dealing with food particles.

ANYONE CAN DO IT
One might wonder about the difficulty and expense involved in diverting washing machine water to a yard. "Any handyman with basic plumbing skills can install it," Linton assures. His system cost around $150 and is quite lengthy, descending from the second story and snaking through the yard to its outlet at the base of a row of blackberry bushes.

When reusing greywater, the average "eco-friendly" laundry detergents and other soaps may not make the cut. Some of these use ingredients that are more eco-friendly compared to traditional detergents, but they will kill your plants. Linton uses a detergent specially formulated to be used in a greywater reuse system.

Such modification is illegal in some areas (especially in the eastern states) and you should familiarize yourself with local laws before proceeding. In California, home plumbing modification for greywater reuse only became legal in 2009. It has been legal in arid Arizona since 2002.

But if there is any doubt about the safety of greywater reuse systems, Linton, at least, is confident of its safety. He enjoys the tree fruits grown from his greywater and attests that they are, in his words, "Yummy." He does suggest that, for safety reasons, greywater not be used for root vegetables like potatoes or edible plants which grow near the soil, like lettuce.
Posted by Education Coordinator at 9:23 AM 0 comments

Rainwater harvesting increases in popularity across the state


Richard Green constructed an underground 20,000-gallon concrete tank for a rainwater harvesting system for his business. Photo by Richard Green. 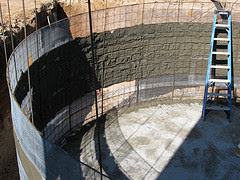 As the need for water conservation becomes more apparent, residents across Texas are incorporating rainwater harvesting into their everyday lives. This innovative conservation technique involves capturing, diverting, and storing rainwater for later use.

"Most people who get involved just want to make a difference and be a part of the green effort to use less energy and water," he said.

Master Gardeners receive 16 hours of rainwater harvesting training and are armed with educational materials to contribute a minimum of 50 hours of volunteer service to earn the title of Master Gardener-Rainwater Harvesting Specialist. The training allows them to volunteer through local AgriLife Extension offices to provide horticultural related information to communities.

In 2004, AgriLife Extension and the Texas Water Resources Institute (TWRI) established the Rainwater Harvesting Task Force, a multidisciplinary group of 18 or more members whose goal is to teach and train others about capturing and managing rainfall, according to B.L. Harris, TWRI acting director.

For its efforts, the team was awarded the 2008 Superior Service Award from AgriLife Extension.

Kniffen said the cost of implementing a rainwater harvesting system varies depending on the system.

The cost also depends on the type of tank installed and who the installer is. Having a company install the system costs about twice as much, he said.

He and his wife decided to capture rainwater while building their house because they had no access to city water and the groundwater was of questionable quality. Kniffen collects water off his house and barn roof, which is about 5,900 square feet of catchment area.

Like Kniffen, when John Kight began building his house in Boerne, he decided to use rainwater as the sole source of his water supply because the groundwater in his area was too hard and contained iron and sulfur.

His rainwater harvesting system includes a 7,826-square-foot roof area, and seven 5,000 gallon, three 1,550-gallon, and one 1,000-gallon aboveground polypropylene tanks for water storage. "With this system I can collect close to 4,800 gallons of rainwater per inch of rain," he said.

Kight said he sees many benefits in rainwater harvesting.

"It's as close to pure water as you can get," he said, "and I don't have to deal with lime build-up or water bills."

Kight has always been conservation-minded and gives numerous presentations and workshops to the community to encourage rainwater harvesting.

He was awarded the 2008 Texas Rain Catcher Award from the Texas Water Development Board, which recognizes excellence in the application of rainwater harvesting systems in Texas.

Although most rainwater harvesting systems are for private use, about 25 percent are for commercial use, Kniffen said. 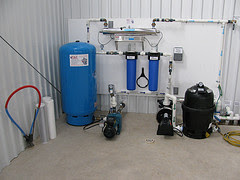 Richard Green, owner of Magline Inc. in Plainview, began his commercial rainwater harvesting project after his company's building burned down.

Magline Inc. is a small manufacturing resource lab that develops foliar fertilizers or liquid solutions that are sprayed directly onto leaves.

When it came time to rebuild, Green decided to collect rainwater instead of drilling a well. "The water that is needed to make the fertilizers has to be soft and clean," he said. "The quality of water that rainwater provides is better for our products."

"It would have been cheaper to put in a well, but the water table in this area is declining," he said. Plainview is over the Ogallala Aquifer, which is depleting at rates of 1 to 3 feet per year.

His system is an underground 20,000 gallon concrete tank that runs rainwater through an ozone treatment recirculation system to disinfect the water and then through an ultraviolet light, making the water readily available and up to drinking water standards.

Green said it has always been a dream project for him, and he is anxious to get rainfall in the recently completed system.

Local governments are incorporating rainwater harvesting into their policies. Some cities and counties provide financial incentives for rainwater capture systems to encourage residents to conserve water.

The City of Austin Water Conservation Department promotes both residential and commercial rainwater harvesting by offering rebates from $30 to $5,000, depending on the system.

Rainwater harvesting projects in San Antonio are eligible for up to a 50 percent rebate of the installed cost of the system under the San Antonio Water System's Large-Scale Retrofit Rebate Program.

Universities across Texas are also catching on to the idea of rainwater harvesting. As new buildings are constructed on the Texas A&M University campus, rainwater harvesting systems are being implemented in accordance with Leadership in Energy and Environmental Design (LEED), which is a national rating scale developed by the U.S. Green Building Council to encourage sustainable buildings.

Texas A&M recently completed the George P. Mitchell '40 Physics Building and the George P. and Cynthia Woods Mitchell Institute for Fundamental Physics and Astronomy building. These buildings include a cistern that collects and stores both air conditioning condensate and rainfall that is used to irrigate exterior landscapes and the university's first rooftop garden.

The four-building Agriculture Headquarters Complex currently being constructed will capture roof rainwater into four 9,000-gallon cisterns that are part of the canopy structure. Water will flow into a 40,000-gallon underground tank that will be used for irrigation.

Two cisterns were installed at Texas Tech University on the east/west sides of the new Raider Park parking facility across from Jones AT&T Stadium. Each cistern can hold up to 14,700 gallons of rainwater that is used to supply the landscape irrigation system at Raider Park.

Rainwater harvesting is a promising alternative for supplying water in the face of increasing water efficiency needs. "Incorporating rainwater harvesting into everyday lives," Kiffen said, "can potentially ensure sufficient water quantity for years to come."
Posted by Education Coordinator at 11:43 AM 4 comments