If you have never visited The Pioneer Woman's website, well here is your chance! I am an avid reader of her blogs and post. One of the sections , on her website, is dedicated to photography. Every few weeks she picks a topic and readers can submit their photos to flickr, for a chance to win a prize.
This weeks photo topic was WATER!!!!! I have had a great time looking at all the pictures that people from around the world have submitted. It is amazing how different people can capture one thing is so many different ways.
If you have a chance, surf on over to her site and look at the amazing pictures. Below, are a few photos that i selected as my favorites. 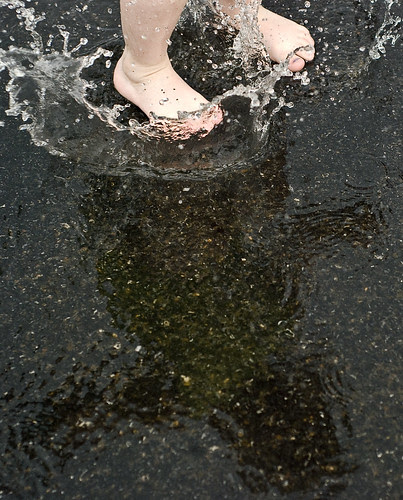 By The Momarazzi Chronicles 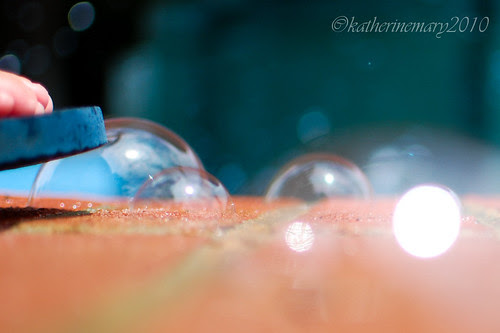 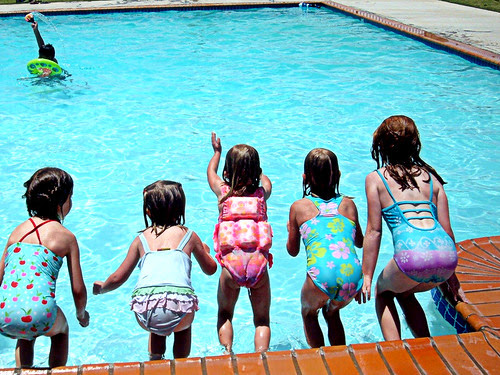 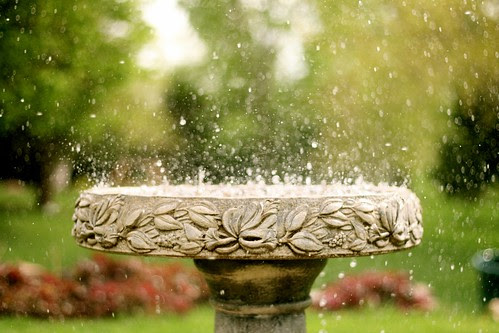 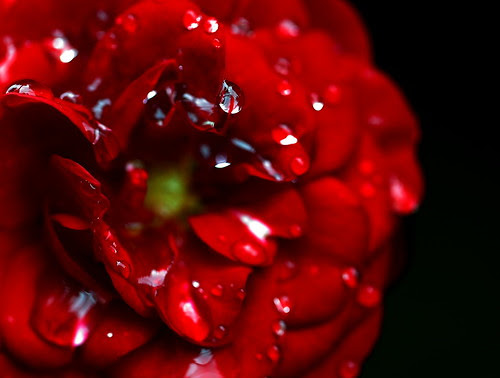 By janine1968
Posted by Education Coordinator at 10:53 AM 0 comments

Alexandra Cousteau Tells Katie Couric, "The Thing Every Human Has in Common Is Our Need for Water" Magazine: glamour.com

Once in a blue moon, I feel the need to read a woman’s magazine. I guess to find out "what jeans are right for my body type", or "what fashion trends are in this summer". All of those really important topics that woman need to know.

So while enjoying my guilty pleasure, I noticed an article with the word WATER splashed across the page. My heart started racing at the thought of actually finding a blog-worthy article in my woman’s magazine!

While the article hits on some water issues, I must admit, it is totally P.R. based. Nonetheless, it is still exciting to see articles about water conservation issues, where one wouldn't expect.

The daughter and granddaughter of legendary ocean explorers, Alexandra Cousteau, 34, tells Glamour columnist Katie Couric why the world’s water—both on the seas and in your faucets—is in danger. But she also shows how we all can help.

To read the article – visit the link below

Alexandra Cousteau Tells Katie Couric, "The Thing Every Human Has in Common Is Our Need for Water" Magazine: glamour.com
Posted by Education Coordinator at 11:13 AM 2 comments

GRAPEVINE — The groundwater ownership issue is thought by some to be the number-one property rights issue facing Texas landowners.

Texas and Southwestern Cattle Raisers Association has made the issue its top priority now and into the immediate future. That was the message that Jason Skaggs, executive director of government and public affairs for the association, brought to members during the recent summer meeting here.

In his presentation he addressed some recent facts and issues related to water demand as well as regulatory changes and actions, a pending judicial opinion at the Texas Supreme Court, some legislative interests, and some statements and actions of various groups.

First he noted that the population of Texas is expected to more than double by 2060. Given that, the Texas Water Development Board’s latest projections indicate that water demand will increase by 27 percent. And, because more than half of the state’s groundwater comes from its aquifers, the state’s water resources will obviously have to be managed if the state expects to meet its demands long into the future.

Today the majority of the land in Texas comes under purview of one of the state’s 96 groundwater conservation districts. The first of these districts was created in the 1950s but the vast majority were created in the late 1990s after the passage of landmark groundwater legislation Senate Bill 1. Some of these districts, Skaggs noted, were created by petition, but the vast majority were created legislatively. Some are tax-based districts; others are fee-based districts. Most of the districts operate under Chapter 36 of the Texas Water Code.

Groundwater Management Areas, created in 1995 and drawn for the most part along aquifer boundaries by the Texas Water Development Board, were meant to serve as a tool to help GCDs and the citizens of Texas plan for groundwater management in the future. In 2005, with the passage of HB 1763, Skaggs said, the legislature drastically changed the way groundwater is managed in Texas.

“Having been at the legislature through that process, I can tell you that piece of legislation was primarily intended to be a planning tool for groundwater districts. It was never meant to be a regulatory tool,” he insisted.

Skaggs explained that HB 1763 requires that GCDs in each of the 16 GMAs develop a joint management plan that establishes, in a quantitative manner, the desired future condition of each aquifer within the GMA. The DFC is what they want a particular aquifer to look like in the future.

“An example of a DFC could be that water levels do not decline more than 100 feet in 50 years, or that spring flows are not allowed to fall below 10 cubic feet per second during a drouth of record,” Skaggs said.

TWDB then plugs the DFCs into their groundwater availability model to come up with what they term the managed available groundwater.

“The reason this is so important is because these GCDs are required by law to implement the MAG number into their management plans,” Skaggs explained. “The state reviews them to make sure those are included.”

Regional water planning groups are also required to use the MAG number in their planning efforts and, as Skaggs explained, that dictates a lot of what happens with respect to funding and water supply projects across the state.

“The bottom line is that these GCDs’ DFC number not only impacts the individual landowners of that particular district, but it also impacts the entire planning region where some of these water projects are taking place.”

Unfortunately, according to HB 1763, the availability determination does not have to take into consideration any impacts such a number might have on the rights of landowners across the state. In fact, as Skaggs explained, HB 1763 allows GCDs to establish restrictive DFCs and possibly even set a cap on overall production and deny any permits once that cap is reached.

Some districts, in fact, interpret that HB 1763 allows them to establish a prohibition against issuing permits in excess of the MAG. Once the cap is computed, the district could even create a special priority permitting system. For example, they could, under this law, decide first to allocate the MAG to historic and existing users, Skaggs said, and then they could choose to divide up the rest of the water among other users — ranchers, for example, who have historically been conservative users of groundwater.

One more possible scenario is that if no groundwater remains after the allocation of historic and existing users receive their allocation, the GCDs could, in theory, deny all other landowners the opportunity to produce groundwater other than for household or livestock use.

“The potential for conflict between GCDs and landowners,” commented Skaggs, “is very obvious in this process. It’s certainly possible that those who have historically conserved the resource by producing less or not producing any at all could be left with few or very little rights at all,” he reiterated. “This could really put the GCDs in the position of adjudicating water rights, or in other words, deciding which landowners will get water and which ones will not.”

“Some have said these districts aren’t really going to cut people off. Well, those of you who live around Bastrop are finding out. In March the Lost Pines district passed a resolution issuing a moratorium on all permits excluding some of the exempt permits,” Skaggs told listeners.

All GCDs within the 16 GMAs have to submit their DFC number by September 1. To date, approximately 43 percent of those DFCs have been submitted to the TWDB, Skaggs said.

Some of the DFCs, such as the ones in the Panhandle, are being challenged. The problem is that even the process of challenging the reasonableness of these DFCs, Skaggs told listeners, is stacked against the landowner.

“Even if the TWDB determines on appeal that the GCD’s DFC is unreasonable, nothing requires the GCD to change its decision.”

“We currently are awaiting the appointment of the Senate Natural Resources Committee chairman,” Skaggs told listeners. “That will really play into this.”

He also predicted with some conviction that the DFC and MAG issues will be addressed again in the upcoming session.

“It’s difficult to discuss those issues without talking about the big elephant in the room, and that is groundwater ownership,” he added. “The Supreme Court decision will likely come out before the next legislative session, and that could play a role in what happens, as well.”

He was referring to the pending Texas Supreme Court case, EAA v. Day McDaniels, a case which he referred to as “one of the most important groundwater cases in recent memory.” TSCRA submitted an amicus brief.

The Texas Alliance for Groundwater Districts also submitted an amicus brief. Skaggs shared some of the quotes within that brief, which should, at least, serve as a reality check for landowners.

Reading some of the quotes from TAGD’s brief, Skaggs said, “The alliance is paying a fee for the preparation of this amicus brief because the court of appeals decision to recognize ‘vested’ property rights beneath the respondents’ (Mr. Day and Mr. McDaniel) property undermines the ability of groundwater conservation districts to manage, protect, and preserve the state’s groundwater as managed by the Texas legislature and the Texas Constitution.”

The key phrase in that particular quote and the word emphasized and repeated by Skaggs when he read it to the audience was “the state’s groundwater.”

A second quote from the brief: “If this theory of absolute ownership were to prevail in this court, groundwater conservation in Texas would be finished.”

“The vested rights theory is what landowners prescribe to, that landowners own the water beneath their property,” Skaggs reminded.

A third quote from TAGD’s amicus brief: “At a minimum, groundwater conservation districts will be burdened by the time and expense defending against the regulatory physical takings claims filed by every landowner who is not permitted to produce groundwater underlying his property. Such a holding would prevent GCDs from enforcing any meaningful limits on groundwater production or alternatively bankrupt the districts.”

“Basically, they don’t want the landowner to have any recourse,” Skaggs told listeners.

He concluded the long discussion with his personal favorite: “If the district is unable to say no to any landowner’s permit for groundwater production without facing a regulatory or physical takings claim, groundwater conservation in Texas is dead.”

These organizations met again in February, along with the Texas Farm Bureau, and together they developed a joint statement on the ownership of groundwater.

“Essentially, the statement emphasizes the need to reaffirm that the landowner owns the groundwater and also that we support local control and management of groundwater versus state control, but we want those regulations to be reasonable,” Skaggs told listeners.

In May these three organizations created Texas for Groundwater Rights, a coalition of like-minded people and organizations dedicated to leading the fight on the vested rights issue of groundwater.

“This is and will be a monumental undertaking which should not be underestimated,” Skaggs told listeners. “We’re going to need every member of TSCRA to be active and involved in that input, but we also need you to be informed. So when we get this information out to you, we really need you to take that information and use it,” he stressed.

Skaggs wrapped up by saying that the management of groundwater resources can be accomplished while respecting the ownership issue.

“We want to work with the districts, but we have a ways to go based on their recent amicus brief,” he admitted.

“Reaffirmation of groundwater rights assures protection against unreasonable infringements on property rights in Texas,” Skaggs said. “Our joint statement elaborates on this.

“Absence of this protection because of fear, bias, prejudice or desire to protect will result in a loss of groundwater rights for landowners. This is a top priority for us. If we don’t do this, we’re going to be looking back some years from now and regret that we didn’t take a stronger stand on this issue,” he concluded.
Posted by Education Coordinator at 6:56 AM 3 comments