Lessons In Oil for Groundwater 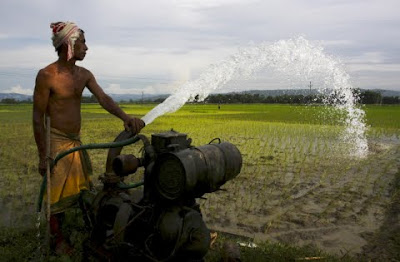 A man irrigates his field with an electric water pump in Inida. Some experts argue that with diminishing supplies of groundwater around the world, changes are needed in how it is managed. Todd Jarvis, the associate director of the Institute for Water and Watersheds at Oregon State University, sees parallels between the planet’s dwindling oil supplies and groundwater depletion.

“Groundwater is the oil of this century,” Mr. Jarvis said at a water-use conference last week in Stevenson, Wash. “Much as we saw oil shortages grip the world, we are now seeing that with groundwater.”

Mr. Jarvis said the solution may come from studying how the world reacted to the crisis in the 1970s when the oil industry was thought to have reached its peak production.

“We are draining water from the aquifers faster than they can be replenished,” Mr Jarvis said. “The groundwater that supplies the drinking water for half the world’s population is now in jeopardy.”


Indeed, the United Nations devoted its 2003 World Environmental Day to the theme of water. “One person in six lives without regular access to safe drinking water,” United Nations Secretary-General Kofi Anan said at the time. “Over twice that number — 2.4 billion — lack access to adequate sanitation. Water-related diseases kill a child every eight seconds,” he said.

Meanwhile, a more recent report using NASA data indicated that farmers in India, scrambling to meet the nation’s food demands, have been taking water out of aquifers faster than they can be replenished.

For Mr. Jarvis, solutions lie in moving away from the traditional precedents for establishing water law.

“The race to the pump serves nobody,” he said, referring to standard practice that generally grants unlimited water rights to individual property owners who pull it up from underground stores beneath them — ignoring the fact that wells even miles apart are likely drawing from the same aquifer.

Mr. Jarvis and other advocates suggest following the oil industry’s lead and moving to a method where all property owners over an aquifer would run it cooperatively and agree to divide the costs and profits proportionately.

“It has worked with oil with companies, countries and people working together to make the resource last,” he said. “And it could work with groundwater.”

source:http://green.blogs.nytimes.com/2009/11/09/lessons-in-oil-for-groundwater-conservation/
Posted by Education Coordinator at 10:43 AM 0 comments

We Are Still Here

No worries........we are still here! I like to give the students time to find their pictures on our blog before i start posting again. We had over 1,000 people view our blog last month! WOW!! We are always proud to showcase our students artwork and I hope you all enjoyed looking at it as much as we did posting them.

The number one topic i am asked about is rainwater harvesting. A lot of people are interested in the subject but they don't know how to get started. Below is an article about the basic uses for rainwater. For more information on the topic, you can visit the South Plains UWCD website. They have pictures from their 2010 project at the BCISD school as well as information for anyone who is interested in harvesting rain water.

How To Conserve Water By Using Rain Barrels 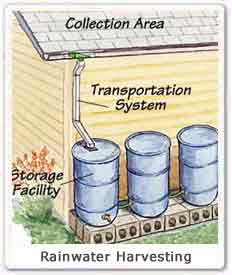 Water is essential for all living beings. Water is everywhere around us in the air and soil. We use water for many things to drink, since we should drink eight glasses of water every day to stay healthy. We also need it in washing cars, clothes, dishes and we bathe in water to stay clean. We also have to use water to boil, put out fires, watering plants especially our backyard garden to contribute to the surroundings. There are also countless plants and animals relying on water since it is the place they dwell in, salt or fresh water and on land.

These are just a few reasons why water is significant. Most people do not understand what they are wasting water. For example, they keep the water running while brushing teeth, and even dish washing. We need to conserve water by using rain barrels, because we do not have much fresh water on earth.
Related CoverageRain Barrels - Confessions of a Convert
At first I was skeptical about rain barrels. However, as my water bill increased along with summer temperatures, I became more interested in water conservation. My initial objections were quickly erased as I learned how easy it is to collect rain water and the benefits of using FREE water for my garden and my water bill.
Rain Barrel Maintenance

Rain barrels easily make a great addition to any backyard. Not only do they help save money, but they can have a great impact on the preservation of the earth's natural resources. Although rain barrels are very low maintenance, it is still very important that they are taken care of properly to keep your water clean and your barrel useful for many years to come.

Rain Barrels And Some Neat Alternatives
Using rain barrels to harvest rainwater from your roof is a simple, low-expense solution for conserving water and saving on your water bill. Water conservation isn't something new and saving it for future gardening or even car washing can come in handy.

Rain Barrel Diverters - How to Collect Rain Water
Rain barrel diverters are one of the easiest ways you can save money around your household. Many cities are facing drought conditions or water restrictions. Because of this, water rates have been rising. While water is still one of the least expensive items we pay for, it is still becoming more expensive. And since it rain water collection is one of the easiest things you can do.We need to lessen water consumption and recycle wastewater for various purposes such as clean-up, manufacturing and agricultural irrigation.

Using a rain barrel can save you thousands of gallons of water during summer months when rain falls are scarce. Rainwater is naturally soft, which means that it lacks the minerals and chemicals associated with ground water or municipal water systems. It is clean and unpolluted. During the summertime, most water for domestic use, irrigation of lawn and garden maintenance. A rain barrel collects and stores water for use during times that need it most. Using rain barrels will likely help homeowners lower water bills, while improving the vitality of plants, flowers, trees and grass.

Rainwater stored at home gives you a water supply in case of emergency water shortage, drought damaged the water line. You can also minimize the effects of drought with rainwater collected using precious supply of tap water for essential uses, and allowing non-potable uses for rainwater. So remember, the use of rain barrel is also more environmentally friendly as it helps to save valuable water and reducing pollutants.

Source
Posted by Education Coordinator at 11:10 AM 1 comments