It has been awhile since I've been able to catch you all up on what's been happening around here. We have been so busy! I'll give you a recap of the past two weeks.

Firstly, the Llano Estacado UWCD and the Permian Basin UWCD have their water conservation calendar contests in the fall. The other two districts, Sandy Land UWCD and South Plains UWCD, have theirs in the spring. With that being said, I had the privilege of visiting seven school districts in the time frame of two weeks. The schools in the LEUWCD consist of Loop, Seagraves and Seminole. Seminole is the largest school in this district having approximately 418 students between fourth and fifth grade! The kids were great and always paid very close attention to the water conservation message. If the kids win the contest with their artwork, they receive a cash prize, so that is always another way to maintain their attention. :)

The PBUWCD schools consist of  Elbow (Forsan's Elementary), Grady, Sands and Stanton. Stanton is the largest school in this district having roughly 135 students between fourth and fifth grade. Once again, the students in these schools were great listeners. The best part about the water conservation calendar contest is spreading awareness and getting students to really think about their water use.

Ag & Oil Day was a great event this year. For those of you who haven't attended, you are missing out on some great information about the agricultural and oil industries! Anyway, the event is open to the public, but schools from surrounding areas also attend. Student presentations take place in the park. This year students went to several stations ranging from homemade peanut butter to chuck wagon history lessons.

The presentation I did was a game called "How much water does it take?" Students got into groups surrounding a small white lap board that they could write on with dry erase markers. I held up pictures of an apple, a pair of jeans and several other objects. Then I asked them to write down how many gallons of water it would take to make that certain object. The best answer of the day was 2,000,000,000 gallons of water. We do use a lot of water daily, but not quite that much!

Here are some pictures from that day: 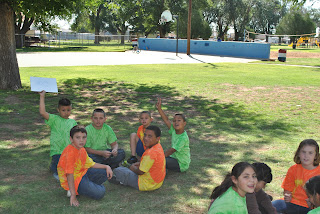 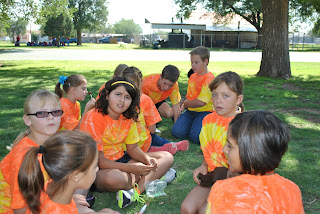 This wrapped up the crazy past two weeks really well. The Outdoor Classroom is hosted by the County Extension office each year. Students get a look into the world of natural resources, wildlife and water. Approximately 150 kids attended this year's festivities at Oak Grove Elementary, where the event takes place. It is normally a two day event, but due to weather, tomorrow's portion will be cancelled. Tomorrow would normally be the field trip day where students would get to go to a buffalo ranch and see springs.

For today's presentation, I decided to have a hands on activity talking about the Ogallala Aquifer conditions in Terry County. The main purpose of this activity was to help the kids understand our water supply and how we utilize groundwater daily. Students were given a small-scale aquifer model with a plastic pipe, acting as a well. With a syringe, students extracted as much water as they could from the "aquifer" and then we discussed the technicalities and repercussions of taking more water up than is replenished in the aquifer. Overall, it was a great success.

Here are some pictures from today: 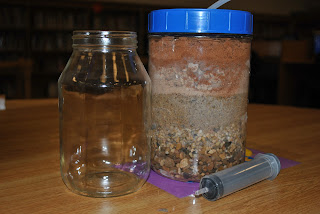 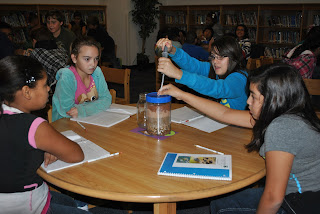 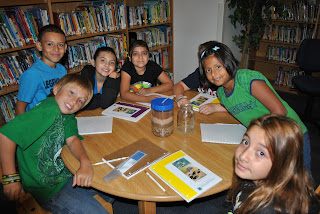